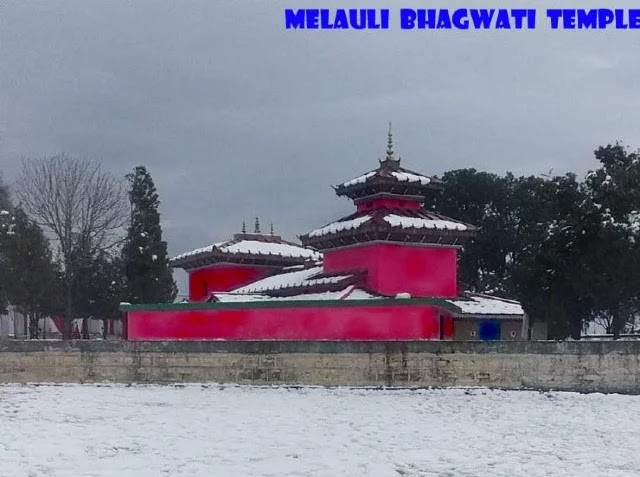 Melauli Bhagwati Temple(Mandir) is a religious and famous Hindu temple located in the Melalui Municipality of the Baitadi District in the Mahakali Zone in the Far-western province of western Nepal. This temple is devoted to the goddess Durga. The temple is painted in red which is also considered to be a symbol of the goddess Durga also identified as Adi Parashakti, goddess of war, a symbol of positivity(Divine forces), a hope. The temple is constructed in a unique pagoda-style. It is surrounded by the wall all around it which makes the view of the temple beautiful on observing from distant. The red color of the temple makes easy to spot and gives a unique look to the temple.
The temple has its own importance and history. It is one among seven Bhagwati temples of Nepal. Each Bhagwati temple represents one sister among seven sisters of the goddess Durga. The temple had borrowed tradition of Deuki Partha( A Traditional custom used to be practiced in the far western regions of Nepal where a young girl is offered to the local temple)  too but after formal abolishment by the government of Nepal, the practice of Deuki has come to an end.

Many festivals are celebrated in the Melauli Mandir such as Dashain and Jatt are the most famous festival celebrated occasionally here. The temple is famous in the far western region because of the great celebration of these festivals. 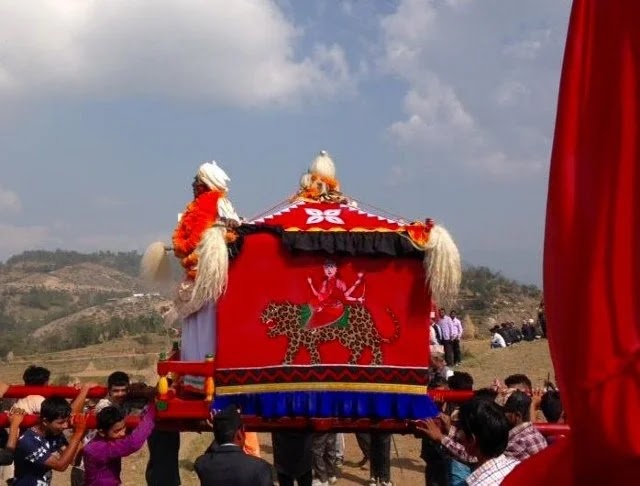 Jaat is a famous festival celebrated in the temples of the far western region of Nepal celebrated occasionally or sometimes twice in some temples. This festival is different from all other festivals practiced in the far western region. The celebration style differs from temple to temple and from place to place. There is no fixed date for the celebration of this festival as it depends upon the Nepalese calendar and other various factors of astrology. The celebration time of Jaat varies according to temples.


For the celebration of Jaat and get blessed by the mother Melauli thousands of people from all around the Mahakali zone and different parts of  India come across the temple every year. But the maximum number of people can be seen in the temple during Jaat. Being the most unique and different type of celebration attracts many devotees. Jaat is not a festival for worshipping the mother Melauli but it can be considered as the festival that reunites families, relatives, friends and loved ones. The festivals bring people living and working in a different part of the country and outside the country back home and back together. The festival brings joy, peace, and happiness among families and friends.